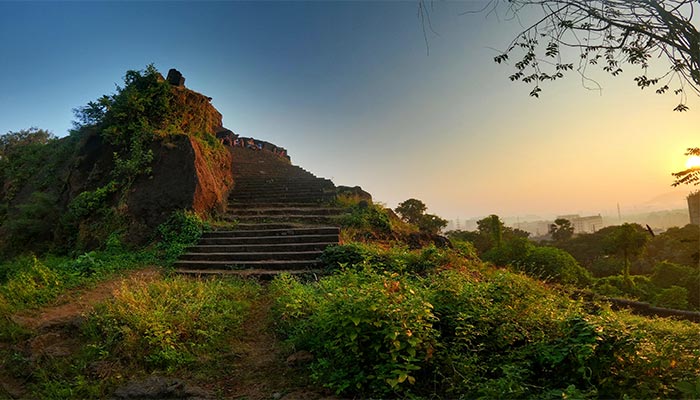 Will you believe when I say there is a 350-year-old grade-1 heritage fort situated in the heart of Mumbai that you can visit anytime during the day? Yes, I’m talking about Sion Hillock Fort. Situated 500 meters from the Sion railway station, this fort will take you back to the times where it served as a boundary between Portuguese-occupied Salsette Island and the British-occupied Parel islands.

How To Get At Sion Fort?

Reaching Sion Fort is not a difficult task. Travelers on Central Line can take a local train to Sion Railway station and walk to the site. Travelers traveling from Western Line will have to get down at Matunga Railway station and take 166 number bus towards Antop Hill. BEST Buses are the cheapest mode of transport. It will cost you only Rs.5 to reach Sion from Matunga. Other options such as yellow taxis are also available.

Sion Fort gives you a panoramic view of the salt panes in Thane creek. Due to the low maintenance of the site, one can witness cracked stone steps, broken walls, and unmaintained bushes all around the fort. Due to the lack of proper sheds, visiting Sion Fort during summers could be a taxing task for visitors. Hence, it is advisable to visit the location during the monsoon season. Also, greenery will increase during the monsoon, and hence, the view will also be more cheerful and pleasant.

Sion Fort was built by the East India Company, under the leadership of Gerard Aungier, the then Governor of Bombay. The conical hillock served as a boundary between Parel Island and Salsette Island. It was declared as a Grade 1 Heritage structure in 1925 by the Archaeological Survey of India.

What to find there:

At the base of the hillock, we can find the Mumbai division of the Archaeological Survey of India. Also, there is a garden named the Pandit Jawaharlal Nehru Udyan situated in the vicinity of the fort. There are broken stone steps that will take you to the small room at the top of the fort from where you can have a mesmerizing view of Thane Creek. You can also find a huge canon at the top of the fort, which was used to protect the territory from the Portuguese.

If you love shopping, there is a famous shopping market nearby – Gandhi Market, where you can street shop or visit local stores for a variety of clothing and footwear options available at a reasonable rate.

If you have ample time, you can also visit abandoned Mumbai forts of Sewri and Riwa. Sewri Fort was also built by the British in 1680. It served as a watchtower for Mumbai Harbour. Riwa Fort was built as a watchtower to protect the British occupied territories from the Portuguese in 1677. Currently, the Riwa fort is in a dilapidated condition due to the establishment of Dharavi slums.

Global Vipassana Pagoda – A Place To Meditate And To Achieve Enlightenment

A One Day Trip to Elephanta Caves