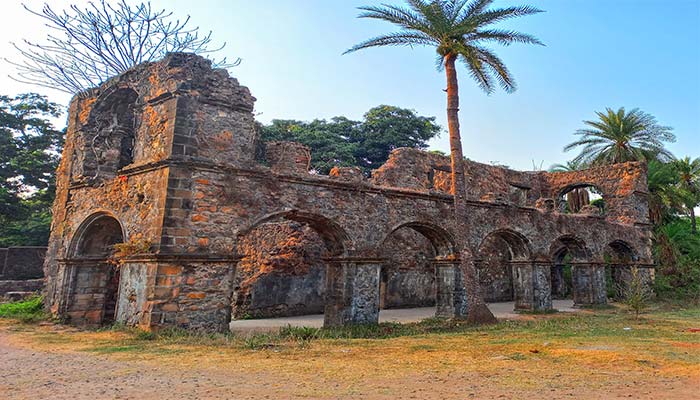 Amidst the coastal ruins and the salty smell of the sea, surrounded with strong coconut trees Bassein fort, admiringly known as Vasai fort nestles. The richly brushed historical fort walls sing the songs of victory today unsaid. And it stands as the most honourable asset from the past.

When history meets the present!

Currently, the nationally protected monument is one of the poorly maintained and conserved spots of the state.

However, let us dive deep into the factors that make Bassein fort a unique yet historical choice to visit.

This fortdrags us back to the existence of its 4 centuries. Initially, Seuna (Yadava) Dynasty built this 110-acre fort. After capturing and recapturing the area again and again. Treaty of Vasai (1534) was signed between the Kingdom of Portuguese and Sultan Bahadur of Gujarat, India. This gave the Portuguese the powers to own the seas, territories, and islands. This later was recaptured by the Marathas in 1739.

To quote Gerson Da Cunha from his book, “History and Antiquities of Bassein”…

“The Portuguese were in possession of Bassein for about two hundred and ten years, during which period it gradually rose to a state of grandeur and opulence that obtained for it, the noble appellation of “a Côrte do Norte” or “the chief city of the North”, in relation to the capital of Goa; for it had become the resort of the most prosperous fidalgos (Portuguese nobility) and the richest merchants of Portuguese India, so much that it became proverbial in those times to call a great man “Fidalgo, ou Cavalheiro, de Baçaim.”

Later, the two entities (British East India Company & Baji Rao II, the Maratha Peshwa of Pune, India) signed the Treaty of Bassein (1802). However, this pact was a decisive gesture for the dissolution of the Maratha empire. This led to the war. And later, it was again sought after by the British during the First Anglo-Maratha War (1802). Yet, Maratha won it back.

This piece of land stands diverse in its purest form due to the commendable history of varying religious hubs here. This land was earlier a city full of life and vibrancy with all the required facilities and services for the civilians. Though the fort was then used for commercial purpose by the Britishers by installing a sugar factory within boundaries. However, the sugar factory didn’t fetch the profits and hence was left neglected.

After the Colonial rule, locals established a statue of the Chimaji Appa (younger brother of Peshwa Baji Rao I), right before the entrance. This marked the victory of Marathas for locals.

Corte de Baçaim, aka Court of Bassein, today, stands as the most popular tourist attraction on the west coast of India. This fort, as a land of victory, today inhibits temples and statues. Though the ancient engravings on the fort are still the major attraction of all.

The scenic beauty ensures us to give a visual treat that beholds the history of the rich heritage of the Maratha era. The glorious marketplace of the Portuguese era awaits your presence to narrate the stories of heroes of the age.

However, at present, beach fort is a prevailing film and shooting location as well. Movies like Josh, Lukka Chuppi, and many more have been shot here. So, a number of crowds visit this place in awe of the movie they have watched.

Interestingly, the old maps of the fort portray an irregular decagon, that is 10 sided, and the citadel stands as a pentagon, that is 5 sided. It is considered that each corner had a bastion wherein just a few of them still exists.

HOW TO GET TO VASAI FORT?

The city which once stood more astonishingly known more than today’s Mumbai (Bombay), serves as an overgrown ruin. This cultural heritage is today under the auspices Archaeological Survey of India.

Vasai fort beach is free for tourists/visitors and hence anyone can reach the spot with ease.

The prominent way to reach this location is to get into a Virar bound train arriving from Churchgate (western line) to the Vasai Road railway station.

The Vasai creek cuts the connection of Mumbai from Vasai and the only bridge that runs through the Ulhas river is the railway bridge. Hence, a local train is the best option to go for. Once, you reach the station, you can shift your journey through a local bus.

Or else, you can opt for auto rickshaws which will help you reach the spot in 20 mins.

And while travelling by train, we bet that you can witness the tower of the Cathedral of St. Joseph lavishly.

Also Read: Kanheri Caves – The Most Peaceful Place Of Borivali

The only way to reach the beach near Vasai fort residing in the Palghar district roadways is by opting for the Western Express Highway (National Highway 8). Though this route is one of the longer ones in comparison to reaching by train.

The nostalgic ruins of the fort elaborate the tale of civilization since the 16th century. And the lucky are those who have had the privilege to visit this location by unwinding the piece of history with every step they took.

To enjoy and roam around the fort completely, you should have at least 5-6 hours in your hand. Even though the route is pretty much simpler to decode, if you are going for the first time, it is better to accompany someone who knows the route in and out of the area. This will also stand beneficial if you do not have much hold in the history of Bassein fort.

Old is indeed golden, for the ones who treasure it.

Our journey was indeed informative as well as gratified at the same time. We discovered a determination and excelled the stream of the journey to the fullest. This spot is our dearest recommendation to enrich the importance of history and long-gone heroes to every person alive today.

Truest worth of historical events exists, only when travellers like us can make sure it never decays.

So, when are you planning your journey next to this appealing historical spot?

A One Day Trip to Elephanta Caves

Kanheri Caves – The Most Peaceful Place Of Borivali