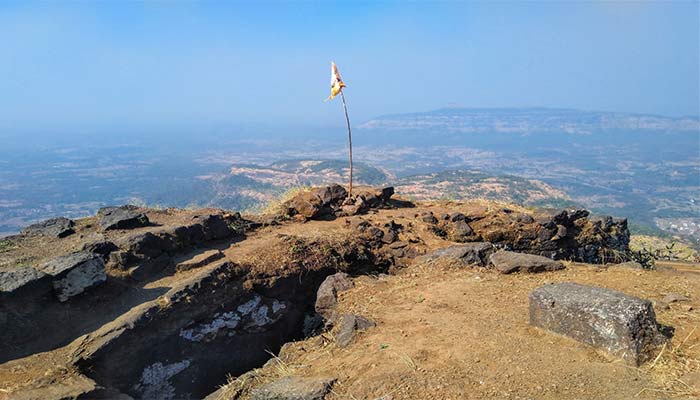 A thumb-shaped architecture situated in the vicinity of Bhimashankar wildlife sanctuary, Kothaligad fort is going to grab your attention. Also known as Peth fort, the location was primarily used as an ammunition depot and watchtower by the ruling kingdoms. The fort rises to an altitude of 2033 ft. and enables a strategic view of Malanggad, Padargad, Chanderi fort, Bhimashankar, Siddhagad, and Matheran plateau in clear weather.

The fort is equidistant from Mumbai and Pune (100 km) and is connected by railways and roads. Kothaligad fort is an ideal location for beginners looking for a less-laborious half-day trek.

The temple carvings and the cave at the base of the fort are recorded to be built in the 13th century. The fort was captured by Abdul Kadir, in 1684, under the regime of Aurangzeb. After capturing the fort, Aurangzeb renamed it as Miftah-ul-Fateh which translates to Key to success. Even after multiple attempts, the Maratha kingdom failed to capture the fort until 1716 – when it was captured by the British.

On 2nd November 1817, Marathas recaptured the fort under the leadership of Bapurao – the general of Bajirao Peshwa. Captain Brooks of the British Empire recaptured the fort in 1817. It remained under their command till 1862. The British used this fort as an outpost for vigilance on the surrounding hills and plateaus all around it.

How to reach Kothaligad fort?

It’s almost 100 km from Mumbai and Pune. People traveling by road will have to take an exit from Khopoli towards Karjat. From there, they will have to reach Jambhawali village where the Kothaligad base is situated. Please note there is no parking facility available at the fort base for private vehicles.

Travelers will have to opt for paid parking in nearby restaurants. People traveling from Mumbai via train will have to take a local train to Karjat and then board a local tumtum to reach the Ambivali village. People looking for a stay can find many options in Jambhwali and Peth villages.

The trek starts from the Jambhawali village and it will take approx. 3hrs for a normal group to reach the top of the fort.  In the middle of the trek, you will find a check post to enter the forest land. Pay an entry fee of Rs.50 per head and continue with the trek. From the check post, the real adventure begins. While ascending, you will encounter snake turns and will witness thick greenery surroundings throughout the route.

After 45mins, you will reach the top of the plateau. Here, you can see the thumb-shaped fort rising high in the sky. The surrounding view is magnificent with many small waterfalls cutting through the eccentric surfaces of plateaus. You can click good pictures at this point as the scene is very photogenic and enables us to capture a large area of the forest in a single click. You will also witness a spectacular view of the wind energy project located in the vicinity of the village.

From here, proceed to Peth village which is 20 mins away. The real ascend starts from Peth village. You may find many restaurants and homestays in the village. You can rest for some time here before proceeding. The riskiest part of the trek is at the end where you will have to climb at 80 degrees inclination to reach the ceiling.

Be very careful at this spot and make sure you have proper shoes to help you go through the windy and narrower path. Make sure to carry abundant water bottles, especially during summers. You may also find many sharbat stalls on the route to the fort.

At the base of the fort, you can find a small temple and a huge cave. At the top of the fort is a chimney-like tunnel with a staircase carved into it to reach the top. In the fort, you will find two water tanks- one at some distance from the base and another one at the pinnacle.

Although it’s an all-season trek, the best time to visit will be during the end of the monsoon as the rain will be less and the view will be surrounded by lush green forest. During summers, you can witness dried waterfalls and the direct heat of the sun. Winters can also be an ideal season but look out for unpredictable fogs that might decrease the visibility and the view from the top of the fort.

What to carry along?

Make sure you wear proper shoes for this trek as the route becomes more inclined at the end and the chances of slip will get high. Carry abundant water bottles and make sure you don’t litter the route as it’s a preserved wildlife sanctuary. Take light food along with. You will find many restaurants on the way for you to eat or have lunch. If visiting during summers, make sure you carry a cap and sunglasses with you. Also, it is advisable to carry a napkin along with you as humidity is expected to be more in summers and monsoon.

Nearby places to visit:

There are abundant tourist spots near Kothaligad Peth fort to explore. A few of them are Lonavla, Matheran, Zenith waterfall, Bhimashankar, Karnala fort, etc. Although these locations cannot be visited along with Kothaligad fort in a single day, you can plan a separate trip to these locations.

Karnala Fort- A Gorgeous World In a Bird Sanctuary