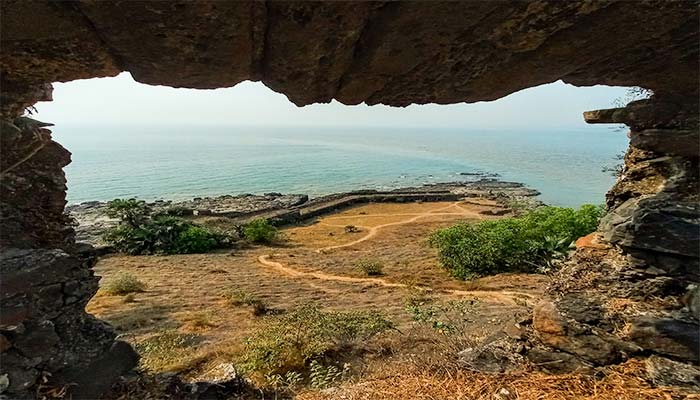 Most of the forts comprise of old, broken buildings and everything that a history student would love. But if you are looking for a full entertainment package, then you should surely visit the Korlai fort, 2828 feet high and 89 feet broad. Along with Korlai Fort, you can visit Revdanda too. Your Goa plans keep cancelling but your friends won’t be able to deny a beach, island, lighthouse and fort at a place! Before you rush to make plans, just read our safety tips for you!

The fort has witnessed many battles between Muslims and the Portuguese. The construction of this place was assisted and commissioned by the Ahmednagar Sultanate and was completed in 1521. Initially, the two regimes used each other’s fortress, but in 1549, there were some tensions between the two factions and eventually between the branches. He took over the fortress of nearly 1,500 soldiers and 1,500 residents.

Legend has it that soldiers camped near the fort to prevent surrender, and placed a dead horse and an elephant at the inner gate to prevent the enemy from entering. But when the Sultan of Ahmednagar fought fiercely with them and defeated them. This is when the fort was again in the control of the Sultan of Ahmednagar. But due to a weak army, they couldn’t conquer it and hence chose to destroy it. This is why, presently, there is only the central tower.

Maratha tried to occupy the fort again in the late 17th century, when Shivaji Maharaja Shambhaji Maharaja’s son attacked the fort on December 6, 1687. However, his attempt failed and he withdrew from the fortress. The fortress was finally occupied by the Marathoners in 1739 and remained under its rule until 1818. After 1818, the fortress was still ruled by the East India Company.

After the company was dissolved, the British took control of India, and the British royal family took over India. The British restored certain areas of the fort, such as the church, and used it on weekends and other holidays.

This place also functioned as a shield against the entrance of Revdanda creek. It was so vast in the past that it could easily accommodate 7000 horses and men. Enemies found it difficult to reach here due to the special characteristics. It has a steep slope which makes it complicated to climb. Moreover, some lighthouses permit the residents to check on the approach of enemies. And many security guards safeguarded the 11 ghats.

How to reach Korlai fort?

If you are an international traveller, then the nearest airport to Korlai is Mumbai. After, reaching Mumbai, you just need to follow the same directions as mentioned above. Other towns such as Roha and Murud are also well-connected to the fort via state transport.

Places to visit in and around the fort

You can relish the beautiful scenery of the clear blue waters of the Arabian sea. The cold and refreshing breezes at its beach will just enchant you. An architect will be stunned by the wonderful remains of the fort. The interesting history of Korlai fort will also surprise many history enthusiasts. Snata Cruz is located on the northern side of the fort which is a beautiful water cistern of olden times.

Korlai lighthouse is still functioning and is located at the gate on the southern side. There is also a guided tour available to help you understand its functioning. You can also see the inscriptions of past residents from the Krishti dialect on the walls, altar in chapel and gates.

Places to visit in Alibaug

There are many places to visit in Alibaug such as Kulaba fort, Kanakeshwar forest, Alibaug beach, Varsoli beach and Kihim beach. Kulaba Fort is a kilometre away from Alibaug which has 250 feet in height and 350 feet breadth. Many battles took place here between the Portuguese and British, Siddis and Marathas. It was built 300 years ago and now a deity of the fort, animal carvings and that of god and goddesses.

If you are a nature lover, then Kanakeshwar forest is for you. It is a very green and soothing place where you can do camping, trekking and nature photography. This is the perfect way out of the concrete jungles. Alibaug beach is named after Ali Shah Bawa’s Mazar. It is well-known for its black sand deposits and beautiful views of Kolaba fort. There is also a platform for the visitors’ safety.

At the outskirts of Alibaug, lies the Varsoli beach consisting of white sand. It used to function as a naval base. The stretches of the coconut trees will from a great photo background.

Though located 12 kilometres away from Alibaug, the pictures of wildflowers with different bright colours will just bring you to Kihim beach. Not only pretty flowers but the migratory birds along with the resident birds will set the mood for a perfect outing.

Revdanda Beach Fort is 17 kilometres away from Alibaug. Its location is at the mouth of the Kundalika river. It was built by Captain Soj in the year 1524. Portuguese captured it till the victory of the Marathas over it in the year 1806. British conquered it again in the year 1818. The fort has only remain of stone. It is very well-known as the island-fort.

You can reach there by taking a bus from Alibaug from the Mandwa jetty. It is one of the most well-known beaches in the Konkan region. It is 117 kilometres away from Pune and 135 kilometres from Mumbai. You can enjoy the beach fun as well as the camping here. The black sand and the clear water will turn out to the most soothing combination ever.

Since it is right on the Alibaug-Murud road, it becomes easily accessible. In the olden times, the fort was surrounded by the creek water from the three sides and the main entrance was from the southern side. Since there are a lot of hotels around this place, you should surely add it to your itinerary. Other places to visit are Nagaon beach, Portuguese Church, Phansad Dam, Kashid Beach, Sarve Beach and Kolaba Fort.

When can you feel the best in Korlai Fort?

The cool and ideal temperature, in the months of winter, is what will make you feel the best in the Korlai fort trek. So, the months of October and February are a perfect time here. If you don’t hate mud and love to splash waters, then you can come happily here in the monsoon. It will be a messy yet adorable visit.

There will also be more greenery and a lot of breeze, light showers to make your visit more pleasurable. You should not come to Korlai fort Alibaug from April to June. It is extremely hot due to the temperature of 40 degree Celsius. There are high chances of you being dehydrated and getting sunburn.

The fort is open from 9 am to 5 pm. There is no entry fee for entering the fort but they charge 10 rupees at the entrance of Korlai Fort Lighthouse. There will be separate charges if you want a guide for your tour. If you are planning to travel during monsoons, impromptu plans are a big NO.

You need to check the severity of rains and then only plan on coming. It will a risk-taking task to travel during heavy rains. Even though you are not going to the Korlai fort trek, you might have to do it because of its elevation. So, you must wear comfortable clothes and trekking shoes with good grip and sole that makes it easier to climb.

The entry gate is more accessible from the bus route and hence it is better to enter from it. The guides are available at the fort complex. You will get to know everything about the fort history and the lighthouse. If you happen to visit the fort during summers, please be very careful of snakes.

There are hotels near Korlai Fort such as JP cottage, Sea View Heritage Cottage, Praful Lodge, Shree Krupa Cottage and Royal Palace Cottage. The cost of the rooms is quite reasonable and you can enjoy your long weekend by staying here. Some of the restaurants to serve you delicious food are Shahi Biryani, Pallavi Deep Restaurant, Patil Farmhouse, Hotel Sanman and Guru Mauli Restaurant.

Structure of the Korlai Fort

The main architectural elements of the fort are inspired by European architectural styles. The Korlai fort itself was designed by the Portuguese architect Dom Filipe Mascarenhas. The main building materials of the fortress are granite and sea sand, and mortar has been used as a bonding material. This fort has a defensive structure, so there is a deep moat around it. The only way to enter the fortress is via a suspension bridge to ensure maximum security for the fortress.

Fortress has 2 main fortresses. There are four passages in the outer layer and seven doors in the inner layer. Although the fort has a strong fortress, the shape of the city wall is very irregular. The two fortification lines of these fortresses divide the area within the fortress into three. Also, here is a large artillery storage space. The fortresses are spread over a considerable area, rising to 2,828 feet.

There is a majestic bronze statue of a lion and a bronze eagle at the main entrance of the fortress. From the fort’s highest watchtower, you can see the entire terrain. There is also an inscription under the insignia on the gate of the fort. There are 2 Portuguese superstars in the badge, who are in the middle of a total of 7 castles. However, the text of the inscription itself is incomprehensible because it is badly damaged.

There are two other inscriptions on the altar of the church, but they are also unrecognizable. The walls of the fort are 5 and a half feet long and have around 305 artillery units. The fort has a total of 11 gates, out of which only 4 are outside the fort. The rest of the 7 gates are accessible from the inside. It also consists of 7 bastions and is named in the memory of a saint. There are remains of a church that was constructed in the year 1630 and was functional till the year 1728.

Also Read: Sion Fort – A forgotten gem of the city

Time to pack your bags!

It is very important to have comfortable clothes and proper trekking shoes in a good condition, with a good grip and sole. It is very important for climbing the Korlai fort. Other than this, you need to wear clothes that cover your body entirely to be safe from insects. You will require energy bars, glucose drinks and dry snacks. Keep a power bank with you in case of an emergency.

We hope that we made your plan a bit more realistic, and, not the one that is most likely to get cancelled. Are you ready?