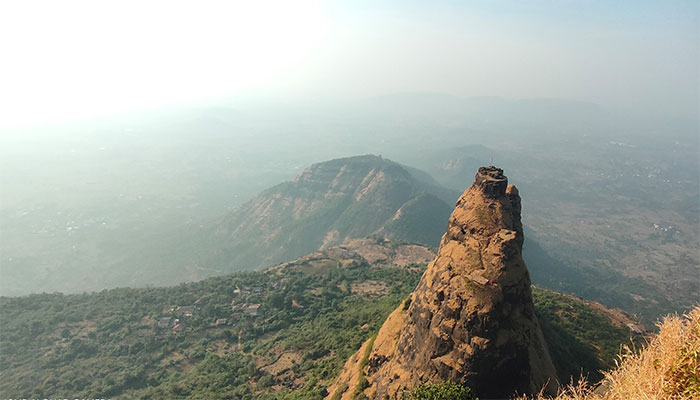 Hello enthusiastic Travelers and Trekkers, today we came up with a Trekking spot on Sahyadri ranges which is very popular and one of the toughest trek locations of Maharashtra. This trek is not for beginners because this trek has steep slope climbing and rock-cutting terrain. This blog will cover all of the possible things which one needs to know before visiting this place.

The blog will cover the following questions:

Where is this Kalavantin Durg?

Kalavantin Durg is a 2,250 feet (686m) summit located at Raigad district in Maharashtra. This place is very close to Prabalgad fort. Kalavantin is known by many names such as Kelve Teen, Kalavantinncha Sulka, and alternative transliteration includes Kalawantin, Kalavati, and Kalavanto based on the Marathi dialects which are spoken in this place.

Precisely, this place is located at a place called Prabalmanchi which is located in Karjat Taluka, but this place is proximal to Panvel station. The base village is Takurwadi. It is a fortress, more accurately a watchtower during the rule of the Maratha Empire.

There is no mentioned history of the place, but local residents at this place claim that this fort was constructed for a queen named Kalavantin at the time when Prabalgad fort was under construction. Some claim that it was named based on goddess Kalavanti Devi….but who knows.

This place is an epicenter for most of the other surrounding Summit on the Western Ghats and gives 360-degree vision from the top. One can visit this place easy as there is road connectivity to the base and public transportation is available.

Kalavantin Durg is really a worthwhile place to trek. The second toughest trek location, with the best view of Western Ghats, this summit defines a story that you can elaborate on to others. Many of the experienced trekkers need thrill and some adventure in their life. I can assure you that this trek will make your breath goes away.

The topmost patch includes stairs which are around 55-65 degree slope which while climbing or return down from the topmost patch will make your nerves feel the heartbeat. The pinnacle of this trek has a beautiful view and you can see prabalgad on the left-hand side, and plain terrain on the other 3 sides.

If you climb this mountain, I am sure that you will never ever get scared from trekking and you will fall in love with mountains. It is a one-day trek and you can climb Prabalgad and Kalavantin on the same day if you have prior experience and habit to climb mountains.

Is it hard to climb as everyone claims?

Kalavantin Durg is hard to climb. It is considered one of the most challenging treks of Western Ghats. For beginners, Kalavantin is difficult but for experienced trekkers, it is not so difficult. At first, when you will look at the pinnacle from the base of the top-patch, you might see it impossible, but remember thousands of people had already climbed this trek from various age groups.

The second toughest trek could be an easy trek if we are focused and know-how to carry forward and overcome fear. Anyone can climb this pinnacle if you have a clear and focused mindset and be in the discipline while climbing the trek. Prefer moving from the centre of steps rather than going to the edge.

Be firm and be healthy with no history of fatigue or sunstrokes. It is preferred to go in disciplined groups and carry a penalty of water while climbing in summer. There is a direct impact of sun rays on your climbing as there aren’t any trees on a top patch to shadow. The rocks and steps become really hot during summer so try not to touch those while climbing the steps. If basic trekking protocols are followed properly, anyone can complete this trek.

Also Read: Tracing Down The Journey To IRSHALGAD TREK From Mumbai!

How do I get to Kalavantin Durg?

If you stay nearby or in Mumbai, you could reach to Panvel bus depot from where you can catch the State Transport (ST) buses which will take you to Takurwadi village. Another alternative way is via private cars or private rickshaw/Taxi which can take you to the base.

Kalavantin and Prabalgad have the same base location which is popularly known as Prabalmanchi. If for some reason the buses from Panvel to Takurwadi are not available, there are alternative ways to travel. You can catch a bus from Panvel ST Bus depot to Karjat and can get down to a stop named Shedung. From Shedung, there are local rickshaw services available at the bus stop which can take you to Prabalmanchi.

Another alternative to reach this place is via train if you are coming from the location which is far from Mumbai. Panvel junction station and Neral station are nearest to Kalavantin. From Panvel Station, one can walk to the bus depot as it is hardly 15 mins walking from Panvel Station. One can take a taxi to Takurwadi village, which is located on the base of Kalavantin-Prabalgad trek.

Rates of the route from Panvel Bus depot:-

Kalavantin is safe if we take care and maintain discipline, with an intention of only trekking. Locals of this area are very amiable and cooperative. There is no risk of wild animals or any other factor, but one of the major risk which can’t be neglected is 55-65 degree climbing steps on the topmost patch.

This place has track records of many deaths. Trekker from Hyderabad found dead at Panvel peak, 10 December 2016 on Mid-Day and other various news articles are the proofs of a number of deaths during Kalavanti-Prabalgad Trek. If you feel like visiting this place for trek, you can go there at your own risk.

It is advisable to go in groups, ask for guidance from locals, and if possible go with locals. There is a registration office where your contact information and identity are checked. There is a fees of 20 rupees for entry. But it was observed that sometimes people prefer to go on the pinnacle without registration.

I suggest you all register yourself so that you could be easily traceable. In my personal opinion, the trek is safe for experienced ones but can be a challenging factor for them as well. Don’t be over-smart and over-confident because a single mistake on the top patch is enough to take away your life. Be careful while climbing.

This trek is best in the months of December – March. This is because, in this month, the climate is cool and less foggy. Sunrays aren’t direct and trek paths (stairs) are clearly visible. This trek is risky on monsoon and I personally suggest not to visit trek Kalavantin trek during monsoon if you aren’t an expert or professional trekker.

During monsoon, the trek is very slippery and there is no visibility of trek stairs which can invite you to the deathbed by direct fall from the cliff if any wrong assumptions are made. During peak summer, sun rays are too harsh and one can have skin burn as there isn’t any shade either on the top-patch path or on the pinnacle.

The breeze above on the pinnacle could be warmer as compared to other months. During winter, this location is a bit foggy but an intermediate trekker could trek this location during winters. So winters could be the second-best option for trekking. Please write your feedback on comments and mentioned parts/your experience if we missed any.

Peb Fort / Vikatgad Trek: – A Trek with the Mysterious route in Matheran Ranges