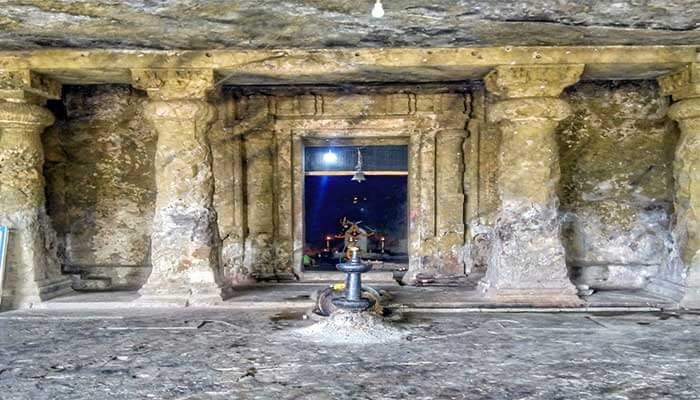 Mandapeshwar Caves holds a brief history of various incidents that led to innumerable conflicts of pride. Pride of faith and culture!

– Unwinding the Treasure of Past!

The name, ‘Mandapeshwar caves’ means ‘Hall of Lord’. As the name suggests, this cave blesses with a mandap supported with the help of 12 pillars. This spot is wide and used as prayer halls.

The caves came into existence around 550 AD. It is known to exist since the same time as the Jogeshwari caves. But this cave is not so popular compared to Jogeshwari cave, Mahakali caves, Elephanta caves, and Kanheri caves. Mandapeshwar Caves is a smaller heritage maintained in a poor state.

Also Read: Kanheri Caves – The Most Peaceful Place Of Borivali

Also Read: A One Day Trip to Elephanta Caves

But unlike other caves in Maharashtra, Mandapeshwar underwent several iterations of conversions. As history suggests, this cave stands dedicated to Lord Shiva. But Portuguese targeted this cave in the 18th century. Portuguese asserted their religious belief by building a monastery and a church.

The church came into being in dedication to Our Lady of Immaculate Conception atop the cave. In the 18th century, the cave got recaptured by the Marathas after the ‘Battle of Bassein’ (Vasai). After which, they uncovered the rock cut shrine and worshipped them. Later, the Britishers defeated the Marathas and brought them back under Christian rule.

By the end of the Colonial rule, the church fell into disrepair and reverted the caves to Hindu god.

HISTORY So RICH Yet Stands NEGLIGIBLE!

Initially, Mandapeshwar Caves stood on the banks of the Dahisar. Caves separated from the river due to the change in the flow of the river over the period.

Around the 8th century, Buddhist monks built the Mandapeshwar caves in Maharashtra. Majorly for mediation and shelter. Later, the cave became an active trade route for a long period. So, it is known as Buddhist cave temples as well.

The legacy of this heritage marks in the carved murals (Nataraja posture), pillars, panels, cross, shapely toned lamp, Shiva Linga, and ruins of the old chapel on top of the caves. The rock carving and the art looks similar to the ones in the Jogeshwari and Kanheri caves.

The old remains of the stoned carved sculptures of Ganesha, Vishnu, Bramha, Nandi (Guardian of Lord Shiva) are rare in Mumbai city. Yet, you can trace them here in Borivali. The entrance of the Mandapeshwar Caves has two figures to welcome us to the sacred sanctum. These disfigured idols recognize as lions due to the visible claws.

When it comes to the chapel, it stands devastated. The only evidence of the strong historical nature is the remains of the walls. Behind the old chapel lies a wall that takes us to the present-day church. Tombstones of the graveyard across the walls are visible.

HOW TO REACH MANDAPESHWAR BORIVALI?

This heritage site nestles in Mount Poinsur, Borivali, which is a suburb of Mumbai. This place is accessible at 12 mins walking distance if used the Dahisar bridge from Dahisar railways station (W). You will find a bustling number of auto-rickshaws parked outside the caves.

Mandapeshwar Borivali with such a rich culture stands under the preservation of the Indian Archaeology Society. Yet, locals had forgotten it’s contribution in world wars. During the time of world wars, these caves were used to hide and soldiers used to stay inside it. But today, unfortunately it is used as an auto and car parking spot at large scale

The scenic beauty and sculptures led our team of ‘Unseen Safar’ to dive deeper into the unsaid tales. This gem that stands still amidst the bustling crowd and traffic is a must-visit. We spent some valuable time in this spot after exposure to the rich history of this location.

The walls located around the caves have a strife history to talk about that bears the scars. Today, people have long forgotten the violent invasions that led here once.

Today, people who know about this cave is either Historians or research students. And we felt glad to visit this place of much importance.

We the team of Unseen Safar left the place with a lesson that could be better expressed in the words of Marcus Garvey.

People without the knowledge of their past history, origin, and culture is like a tree without roots.