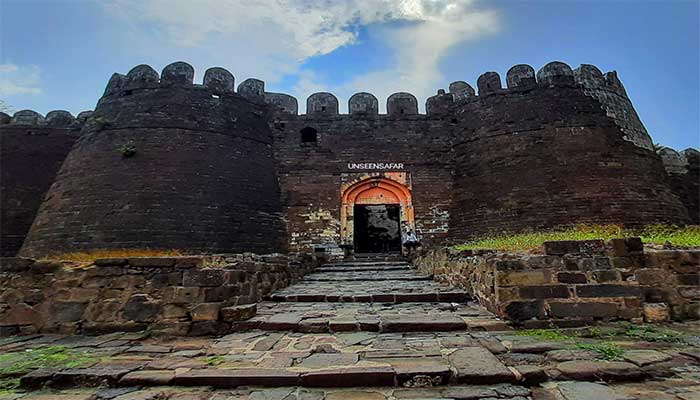 Daulatabad Qilla Aaa Fort is a frozen time capsule. Its location is on the top of a cone-shaped mountain in Aurangabad, about 200 meters above sea level. Its strategic location, incredible architecture and three-tiered defence system are wonderful. They make it one of the most powerful mountain forts in the state.

Daulatabad Fortress makes it one of the best-preserved fortresses in the country. Its location is at the top of a cone-shaped hill. And the surrounding of the lower part has a moat.  The moat has crocodiles to protect the entrance from the enemy. The entire fort receives protection from several forts. During the Tuqlak dynasty, several cannons were further reinforced.  And they built a 5-kilometre fortified wall to protect the majestic building.

How to get there?

Daulatabad Fort Maharashtra is about 10 kilometres from the city of Aurangabad. You can reach this city from Mumbai or Pune. There are several buses from Mumbai to Aurangabad and the trip takes 11 hours. If you plan to travel by train, it will take you 6-8 hours to travel from Mumbai. Compared to Mumbai, Aurangabad is closer to Pune. This is a 4-hour train ride and the bus will take roughly the same time.

It is a beautiful historic castle located in Daulatabad. Chini Mahal. On the way to Ellora’s cave, you will come across this Mahal. It looks like a small place from the outside. But when you enter the Mahal, you will be in awe to find that it is big as seen from the outside.

Alauddin Brahman Shah built it in 1435 AD. It is 63 meters high and stands in front of the Jumma Mosque. He built it with 3 circular balconies. It has defensive and religious functions in the fortress. This circular tower with three balconies has similar characteristics to Delhi’s Qutub Minar.

This is a place that brings harmony to the Hindu and Muslim communities. The location of the temple mosque is in Daulatabad. It is one of the unique religious destinations because the use of this site is both a temple and a mosque. The outside looks like a temple, but the inside looks like a mosque.

One of the most challenging parts of visiting Daulatabad Fort is to reach the top. You can reach there only through walking.  You must climb 750 stairs, which may take 1 to 3 hours, depending on your speed. The difficulty level is easy to medium, there are some dark areas along the way, you need to bring a flashlight. You will also experience the peculiarities of the Daulatabad Fort. For example, there are not two entrances facing each other.

It is very interesting to notice and observe when you go. All the effort and time are worth beholding from the top of the mountain. It is a fascinating testament to the splendour of medieval architecture.

If you are an aesthetic lover who adores amazing architecture, then you should not miss visiting this place. The unity of Hindus and Muslims is worth witnessing. Trekking here once in a lifetime is something you should look forward to.