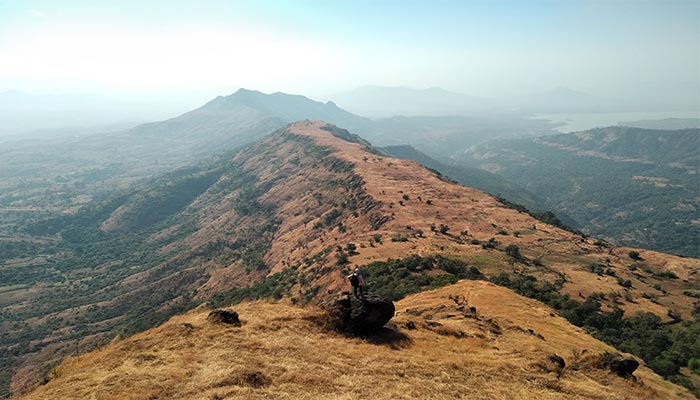 Do you want to explore a place that will take your breath away? No need for a breathtaking place, I have a place where you could breathe the fresh air. Garbett Point, the finest place in Matheran, and this part are attached to the popular Matheran hill station. A not-so-popular trek location but a worth trek to do. Let us learn more about it.

Garbett Point is a one-day trek that adjoins the Karjat-Neral road close to Bhivpuri Railway station on the central railway line. It comes under the Matheran plateau, which is one of the popular tourist locations in Maharashtra and one of the most popular hill stations.

This fantastic point was discovered in 1850 by collector Hugh Poyntz Malet, who was in charge of the Thane district. This point is at the distance of 17Km from Matheran (Hill station) and 8km from Diksal village with a grand view of the plateau below. It is about 2625 feet in height and the difficulty of this trek is Grade Medium. This place has beautiful sightseeing and fresh air to breathe.

How to reach this place:

Garbett Point can be reached in many ways. The most appropriate way to reach this place is via Bhivpuri Railway station. From there, you can ask anyone for the route to Dhom Dam (Diksal village) which is the starting point for the trek.

Another way to reach this place is via State transport buses. While returning from Garbett Point, you can walk till the Matheran exit point where you will find a bus which can take you back to Karjat Bus depot via Neral railway station and Karjat railway station.

The way to reach this place can better be defined as a route from Mumbai and a route from Pune. This place is closer to Mumbai, so one can take the aforementioned route. Another is from Pune – Panvel-Karjat ST bus which will take you to Karjat bus depot from where you could find your way to travel via local transport to Dhom Dam or can reach to the Bhivpuri railway station.

This place has a wonderful experience as this place is comparatively less crowded and the view from this point is really beautiful. Though this place comes under the Matheran plateau, people prefer to visit less as it is a bit outwards from the popular points of Matheran (Such as paranoma point,  Khandala point, money point, honeymoon point, etc.). Also very few of them know about this place attached on Matheran plateau. Also, Night Trek and camping are allowed in this place and the night view of this place is really worth seeing. The night trek and campfire within the dense forest around us, a perfect night to capture.

Also Read: Tracing Down The Journey To Irshalgad Trek

This place is really good for photography and videography. The level of difficulty is medium and this trek is safe if a person takes care of himself. There are hardly any death cases observed while trekking at Garbett Point. This place is observed to have beautiful dense forest while returning to Matheran exit point and ‘Jungle thrill’ can be observed. You can also return back from Garbett point from the path through which you climbed this trek. Matheran exit point has the local buses which run between Matheran and Karjat bus depot. One can take that bus while returning from the Matheran exit point.

This place is preferred for trekking in the monsoon and winter seasons. Trekking in summer can be very dehydrating and tiring. Monsoon will include greenery and waterfalls in the way of trekking. Winter will give a foggy environment which is best for photography.

For camping on the Garbett point, prefer night trek till the top during summer as star grazing in summer results very beautiful due to in the clear sky.

Any alternative if you don’t want trek

Yes, you can reach the top without a trek. As Garbett’s point comes under Matheran one can directly reach the top for camping by taking the last bus for Matheran via Karjat bus depot or via private vehicle. There is a place at the Matheran exit gate, where you can park your personal vehicle without paying the parking fee. Also, this place is equally worth it if you don’t want to trek as the distance from Matheran gate to the Garbett point includes a jungle thrill but going in at night could be risky. The flora and fauna of this place are in diversity.  So there is a lot more if not trekking.

List of nearby places (Sorted by distance from Garbett point):-

Also called Dodhani waterfalls is very famous for sports such as rappelling and mountain climbing. It is 115 feet standing tall waterfall. It is located at the base of Matheran hills and is accessible from Panvel or Karjat via road. It is at an approximate distance of 3.9 km from Garbett point.

Dhom Lake is located near Ashane waterfalls. It is approximately 15 km from Garbett point. It is a beautiful lake and normally preferred for lakeside camping. This lake is made due to Pali Bhutvali Dam, also called as Dhom Dam, which is considered a hidden dam in Karjat. This is a perfect place to pitch tents and gaze at stars. This Lake is alongside the trek route of Garbett via Diksal Village.

Located in Ashane, this waterfall is approximate 16 km from Garbett point. It is a huge and safe waterfall. Ashane waterfalls come between Bhivpuri and Garbett point so one can take any of the routes preferred. This could be one of the best places to visit during the monsoon. The water is clean and you will enjoy this place. In monsoon, this place is heaven as there are many small waterfalls around it which makes this place worth visiting.

Located in Sondewadi, a beautiful watchtower is located at a distance of 29 km from Garbett point. This fort is near Karjat railway station (9 km) and was built to protect the trade route. This place has beautiful sight-seeing of Morbe Dam, Prabalgad, Rajmachi, Songiri, etc.

Located near Burujwadi, which is by road at a distance of 32 km from Garbett point. It doesn’t have a direct way from Garbett point, but if there is any, do let us know in the comments. Katwan Mountain viewpoint, located in Katwan plateau is a beautiful place and a worth place to visit.

Kothaligad Fort: A Key to Success

Karnala Fort- A Gorgeous World In a Bird Sanctuary