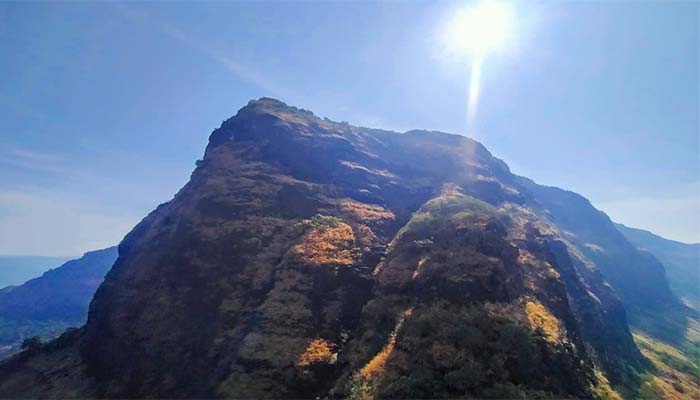 – Mesmerizing Experience at the Top!

Mountains are one of the most significant aspects of our nature. The speciality of the mountain region is the biodiversity, rich air, clean water, landscape, and spiritual values it beholds. Mountains teach us the value of every step we take in life. It helps us to celebrate every ounce of our journey to the top. And that’s the beauty of mountain treks.

“Some mountains demand a good pair of shoes. While on the other hand, others require an entire team to conquer. Knowing which is which, is the key to success.” – Anonymous

Prabalgad lies between Matheran and Panvel in the state of Maharashtra. It stands elevated (up to 2,300 feet above sea level) in the Western Ghats. Until the Maratha forces undertook this space, it was known as Muranajan. This fort is built in the rocky plateau closer to Matheran and celebrates a commendable history to touch upon.

Another name for this spot is Kalavantin Durg. One can approach this fort through the steep climb. The steps that lead to the fort was cut into the rock of the hill. Though there is no rail edge and ropes to grab while trailing to the top. It is safe to trek here.

Kalavantin durg trek falls under Raigad district. This fort is built in regards to the Bahmani Sultanate architecture style. When the trek starts, from the base point to reach the top the journey feels mesmerizing. The scenic beauty is magnificent from various viewpoints. The fort tends to have 2 major gateways and 11 towers which stands devastated. The reason is perceived to be the numerous invasions that took place.

As per the current state, only 4 towers and a beautiful pond is what remains. You can also encounter a Lord Ganesha temple inside the ruins.

The Prabalgad trek difficulty level is moderate and can be overcome with a minimum of experience.

If adventure lies in your blood, this is the fort to conquer.

During the conquest of the Konkan by Malik Ahmad, around 1458 AD, took over the fort. But after the disintegration of the Bahmani Sultanate, Ahmadnagar Sultanate took over the control. And after their collapse, Shahaji led a helping hand against the separated forces.

However, after the defeat of Shahaji, Adilshah of Bijapur took over the authority. During 1657 AD, Chhatrapati Shivaji Maharaj won the region back from the Mughals. At that time, the Mughal Sardar, Kesar Singh was ruling the fort. Though after the defeat, the women present in the fort performed Jauhar (tradition of self-immolation for a respectful and honourable death).

But after the death of Kesar Singh, Chhatrapati Shivaji Maharaj as an act of significance and kindness allowed Kesar Singh’s mother and her grandchild to walk out of the passage safe.

Yet, after the collapse of Maratha rule, Britishers increased the revolt among the civilians. And one such man who protested (against) the British was Umaji Naik. This man is believed to hide out and occupy this fort from 1826 AD to 1832 AD.

The history of any fort is worth deciphering before or during the visit.

Basically, the trek starts at the base village/point which is 3 km apart from Vardoli village. This village has a road directly accessible from Matheran. Henceforth, it is a moderately tricky trek to reach Prabal machi from the Vardoli village. And can be travelled under the guidance of the travel guide to avoid any confusions.

The Prabalgad trek distance can be covered in just 2 hours.

HOW TO REACH Prabalgad Fort?

From the nearest airport located in Mumbai, you can travel here at a distance of 50 km. You can avail of taxis directly from the airport to this base village.

Panvel is well-connected with Mumbai and Navi Mumbai by rail. The train facility is exceptional. The railway station is the major transport medium to reach the spot.

State buses or private buses, either way, are safe to reach the base hill. The autos or taxis can be acquired to reach the place.

The ONLY place a man feels wild is in the mountains.

Apart from a trek through the dense forest, this is a campsite as well. Prabalgad camping can be experienced to the best when you stay overnight.

Though most people rest at Prabalmachi village and trek to the fort in the early morning. This gives one the privilege to witness the sunset at 360o view from the top.

For an offbeat trekking experience, you should definitely visit Prabalgad Panvel.

The view from the top is enough to make you feel alright!

Now, that you have traced the required information to reach the spot. Why are you wasting your time? Tie your shoelace and seal your bags because you are about to visit an exciting trekking spot in the state of Maharashtra.

Also Read: Tracing Down The Journey To IRSHALGAD TREK From Mumbai!

Things To See At Prabalgad Fort:

Tracing Down The Journey To Irshalgad Trek

Daulatabad Fort- The Trekking that will amaze you!